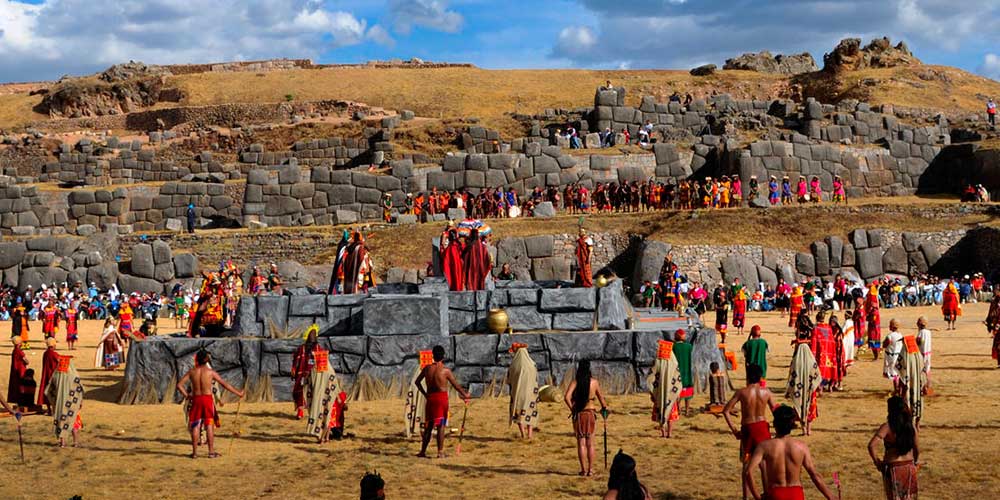 With this program you will have the opportunity to discover the famous annual Festival of the Sun "Inti Raymi" held on June 24th. We also give you an overnight in Machu Picchu village to appreciate the sunrise over Machu Picchu Inca City.

Cusco holds many different festivals full of artistic expressions. It is important for the Cusquenian to nourish themselves from their profound origin, projecting an alliance with nature and the mother earth or Pachamama through their festivities full of rhythms and colors. A way for them to reinforce their commitment to life, extending it with their hospitality to the visitors.

Cusco bieng the capital of Tahuantinsuyo, the Inka´s Country, the center of the Empire of the four regions and the "navel of the Inka world." One of the most outstanding Empire in the history of humanity. The Incas ,within less than one hundred years, expended their territory from its northern borders of Quito, in Ecuador, to the far south of Santiago, Chili and as far as Argentina. Cusco is one of the most incredible city in America.

We will pick you up from the airport or the bus station to then take you to your hotel. The city tour begins at 14:00 p.m. and will include attractions.

It was the Main Temple of the Incas, where devotees worshiped the Sun God. In that time, the engineers used gold to cover the walls. In the main terraces existed statues of animal, in their natural size, also covered with gold. It served as well as the residence of the many wives of the Inca Kings or rulers. Embalmed mommies of the Kings were kept inside and for some looked almost alive.

The city of Cusco was in the form of a Puma which was exactly like Saqsayhuaman. Situated about 3 km from Cusco, it is an impressive Temple monument with magnificent stone architecture. It is also known as the Casa del Sol, which holds every year, on June 24th, the ancestral ritual of Inti Raymi.

Known as the Temple of Pachamama or Mother Earth, it was used as a ceremonial center for rituals. The amphitheater was used to make sacrifices in black flames. During the winter solstice, on June 21st, the sun illuminates the well-polished bricks revealing a shadow in the form of a Puma. From this natural phenomenon, known as "The Awakening of the Puma", was born the great Incas festival of Inti Raymi.

This was the Fortaleza of the Incas. There was always surveillance through out the Empire and along the Inca roads. Considered also as a controlled entry and exit of all those traveling to or from the holy city of Cusco.

The famous Royal baths, situated at 7 km. from Cusco, it was used as a ceremonial center to worship the element of water. It is also believed to be a resting place for the Inka. At 6:30 p.m. we will return to Cusco, you can then decide to either be left in the beautiful main square, the Plaza del Armas or be taken back to your hotel.

Day 2: Tour of the Sacred Valley of the Inkas

P'isaq is one of the most important archaeological sites. Its name comes, probably, from a very common type of bird in this area known as "p'isaqa." It is suggested that the pre-Columbian city was in the form of a "p'isaqa" representing the local fauna. Today, it is a colonial town named P'isaq. It holds a famous local market, full of crafts and local products.

The archaeological complex of Ollantaytambo was a strategic military, religious and agricultural center. The architectural scene is exceptional, not only for its.

Size and style, but also for the uniqueness of its buildings. Ollanta comes from the Quechua language, (which is the name of an Inca captain, whose story was saved as an oral tradition, and written as a drama by Antonio Valdez Urubamba priest in mid-eighteenth century) Also from a spanish derivation of the word tampu (Tambo in Quechua), meaning "City that offers accommodation, food and comfort to passengers.

19:00 pm We will take the from Ollantaytambo to Machupicchu village.

Arrival in Machupicchu village and transfer to your Hotel.

After breakfast we will take the bus (6am) up to Machu Picchu to enjoy the beautifull Sunrise. After, you will have a guided walking tour (approximately 2 hours) given by your tour guide and after this you can explore the mysterious city at your own discretion.

If you have you’re the entrance ticket for Waynapicchu, you can ascent Huayna Picchu (2720m/8890ft)!!! (It takes about 45 minutes to reach the top).

We will then take the train back to Ollantaytambo with the Expedition Service (to Ollantaytambo) and a bus to Cusco. We'll be in Cusco around 22:30pm.

NOTE: The admission to Waynapicchu needs to be confirmed at the time of booking and it is subject to space availability. (Maximum 400 people per day) Waynapicchu entrance fees is an extra $ 15.00.

You have to back track a little to rejoin the trail as it passes Conchamarca, a small Inca dwelling situated in the shadows of Sayacmarca, which was probably a Tambo for weary travelers on their way to Machu Picchu.

We will begin the tour at 8:00 am, picking you up at your hotel. The ceremony of INTI RAYMI has three different scenes in three different places. We will take you the first scene of the festival, the Qoricancha Palace situated on Av. El Sol. After the show, we will continue to the next scene which is in the main square, the Plaza del Armas. Finally, we will go the last most special scene held in Sacsayhuaman (3 km from Cusco, going there by bus).

The principal central staging of INTI RAYMI is held in the Sacred Temple of Saqsawaman. Tribunes have been placed there to accommodate about 3,906 people. All the seats are very comfortable for the spectators. The VIP Zone is formed for these 3 tribunes, which gives a better view of the ceremony.

EMEFUC offers other necesary services to attend to the INTI RAYMI, VIP confortable seats for the spectator, Higienic Mobil Bathrooms, Fisrt Aid Post and police security which allow you to enjoy this ancestral ceremony.

Day 5: Transfer from the Hotel to Airport

According to your schedule and depending of your itinerary, we'll provide you the transfer from your hotel to the airport or bus station, assistance by our staff.

END OF OUR SERVICES 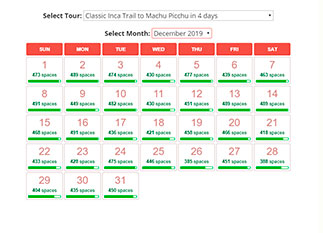 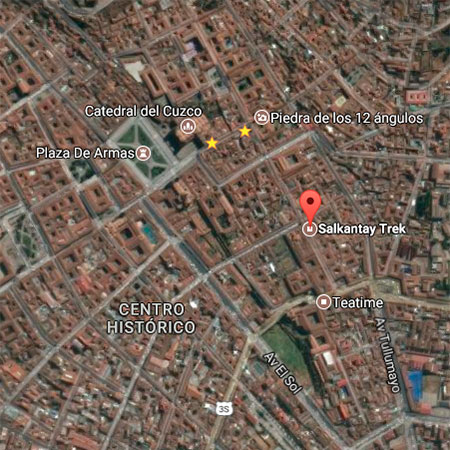